Five things you need to know about bear bile farming

1. Bear bile does have medicinal uses but there are cruelty-free alternatives

Bear bile has been used in traditional Asian medicine for thousands of years. It contains high levels of ursodeoxycholic acid (UDCA) known to be useful for treating liver and gall bladder conditions in humans.

However, there are now many readily available herbal and synthetic alternatives with the same medicinal properties. Traditional medicine practitioners agree that nobody’s health will suffer from a lack of bear bile. 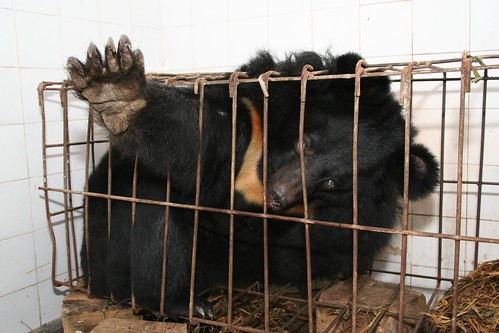 Bears are kept in tiny cages on bile farms for years, often decades.

In the past, bear bile was obtained by hunting bears in the wild and killing them to remove their gall bladders. It would have been a particularly rare and prized ingredient and used sparingly for specific medical conditions.

However, in the 1980s, the practice of keeping a bear for the duration of its life to constantly extract bile began, and bear bile farms sprang up across Asia.

According to recent official numbers, at least 10,000 bears are currently kept on bile farms in Asia.

2. Extracting bile from bears is as cruel and painful as you would imagine Bile being extracted from a moon bear.

A number of extraction techniques exist, all of which are invasive and traumatic. The techniques vary between Vietnam and China and range from the “free drip” method where the bear suffers a hole in their gall bladder which is continuously reopened, to the insertion of permanent catheters, to locating the gall bladder via ultrasound and extracting bile through a four-inch needle. While extraction methods vary, all bears live in tiny cages for the duration of their time on bile farms. “Crush cages” and “full metal jackets” are now illegal in China, but are still likely to be used on poorer farms.

Bears grow up in these tiny cages to the point where their bodies have contorted to fit the bars. Most have missing and damaged teeth from trying to gnaw their way out. A bowl of bear bile.

Some farms in China have breeding programs, but many bears are poached from the wild as cubs. They are stolen from their mothers and likely witness her being killed by the poachers as she tries to protect them. Most of these cubs are never released and can suffer up to 30 years of continuous pain by bile extraction.

Most farmed bears are starved and dehydrated as this can encourage bile production. Because of the unnatural and unhygienic conditions they are forced to live in, many also suffer from multiple diseases and malignant tumours that ultimately kill them.

3. There are alternatives to bear bile

There are over 50 herbal alternatives and many inexpensive synthetic alternatives to bear bile. Animals Asia engages with the traditional medicine community and users of bear bile to promote alternatives and reduce demand through our Healing without Harm campaign.

We published and distributed a free booklet, “Herbal Alternatives to Bear Bile” across Vietnam and a guide to growing and maintaining herbal alternatives at home and collaborated with the Traditional Medical Association in Vietnam to create a herbal alternative to bear bile which we regularly hand out for free at community events.

Our work with local schools and communities has seen 13 herbal gardens flourishing across the country.

These actions along with other findings suggest that demand for bear bile is reducing. 4. Bear bile farming is legal in China but not in Vietnam

Unfortunately, bear bile farming is still completely legal in China. Although there are regulations in place aimed at curbing the worst cruelty, these are often ignored and so far there have been no prosecutions.

Bears on bile farms live in isolation and cannot express any natural behaviours.

5. We won’t stop until bear bile farming ends for good

Since its inception in 1998 Animals Asia has continuously campaigned to end bear bile farming.

We have rescued hundreds of bears in Vietnam and China from bear bile farms and are absolutely committed to ending this inhumane trade forever. And with your help, we will do it.

Join the global movement working to condemn bear bile farming to the history books and together we will change the world for thousands of bears who are in desperate need of our help.

Nevada Wildlife: Inspect your boat before heading out on the water | Carson City Nevada News