CoreCivic: Sieged from all directions

CoreCivic (CXW) has never been in such a bad position as nowadays. The sector in which it operates is literally sieged by regulators and a strong Biden administration who wants things to change. The long-term decline in overall private prisons revenues and a failed diversification of the business model in the last years have almost doomed the future (unless big changes are made) of CXW. Along with these major issues regarding their activities, the balance sheet is also not in good shape, with long-term debt at about $1.5 billion and only $162 million of cash, and interest expense burning operating profits. These are definitely not good days for CoreCivic and its survival will depend on urgently needed and wise management’s decisions on how to allocate future cash flows (other than the declining sector in which they have invested up to now).

What’s CXW and why its position is precarious

CoreCivic is a private prisons operator who works in the US, managing about 47 reclusion facilities for the BOP (Bureau of Prisons) and USMS (United States Marshal Service). Since states and federal government often face pressure about budgets and efficiency of allocated funds, it has been a common measure in the last years to contract out prisons and their management. Private operators like CXW profited by increased demand for bed places and other post-reclusion services (rehabilitation and surveillance). Everything seemed fine and they were enjoying big cash flows and dividends (that’s why CXW was a REIT until Jan 2021), and then public opinion stepped in. People started asking for fundings being redirected to other areas (such as mental hospitals and healthcare) rather than enriching private prisons operators, and Democrats have embraced that philosophy before and after the Trump administration. Well before the election, their position was clear, and CXW stock price reflected that. In January the ban that every (bullish) investor on this sector was fearing arrived, with the Biden administration looking serious about the issue of the private prisons. The new president banned every federal agency from making contracts with private prisons operators, and so not BOP nor USMS can now sign long-term agreements with CXW to build or manage new facilities. This is really a game-changer, not because of the short-term impact, since there are still many contracts alive and revenue-generating, but because the long-term success of this company has been almost doomed by this move. Despite major regulatory risks on the horizon, the company still has 82% of revenues coming from the Safety segment (prisons), making it still really weak in front of this recent ban. 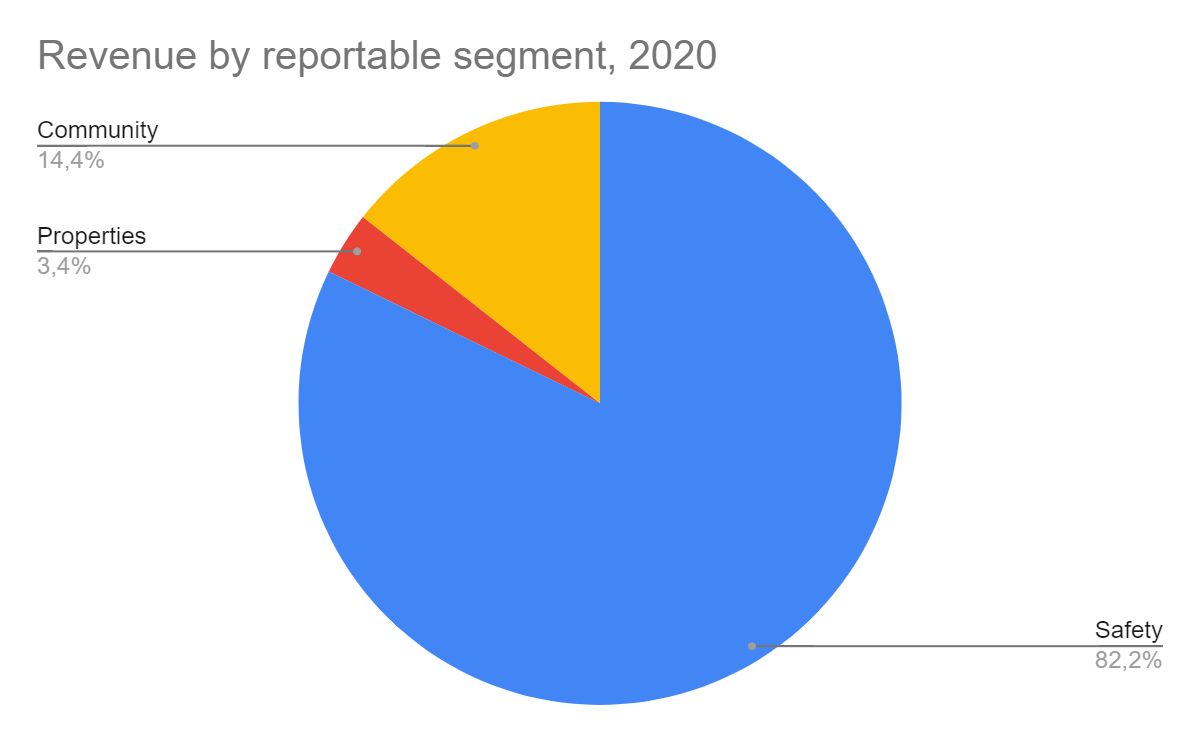 By reading the SEC filings and press releases it is quite clear that the company wants to appear safe and with no issue about capital allocation strategy. From the latest press release:

“We are confident in the stability of our cash flows and believe our capital allocation strategy best positions the company to generate long-term value”.

But the reality is that the vast majority of their revenues are still coming from federal agencies. Besides the regulatory environment, which is definitely hostile to CXW, this sector has been in a perpetual decline since about 2010, with the overall private prisons population declining steadily and thus revenue growth disappearing from operators’ financial statements. 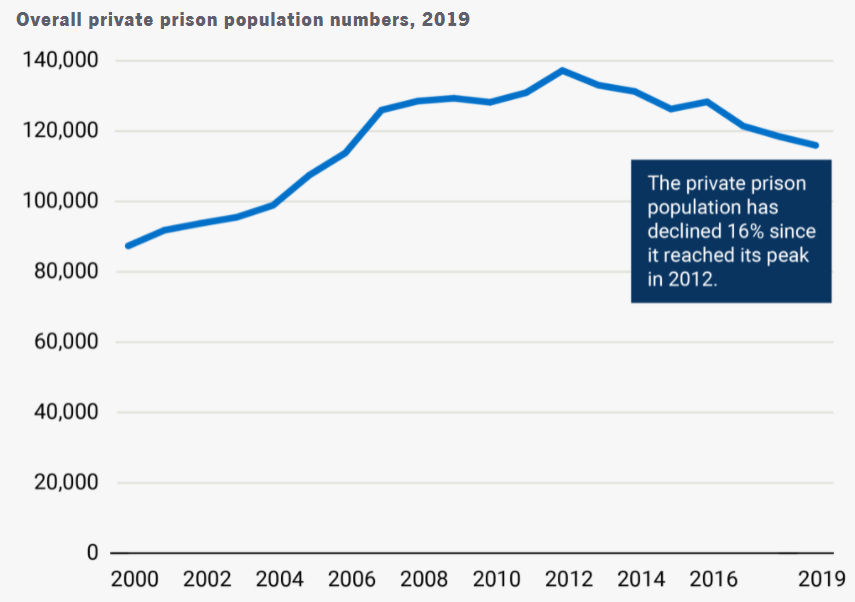 (Source: Private Prisons In The US, a short analysis)

It is common for companies like CXW, with tons of facilities and thus capital-intensive business models, to operate with a higher-than-average level of debt and debt-to-equity ratio. This can normally be sustained with moderately cheap debt (not that hard with such an interest rates environment) and constant and positive cash flows generation. Now, CoreCivic’s leverage ratio is about 1.8, compared to an average of 0.8 for Real Estate companies. This is the result of many years of forced distribution of cash flows, given the former company’s structure (REIT), which never allowed for cash accumulation and weakened the overall financial stability of the company. When a major crisis like Covid-19 hit a company with such high leverage, unable to underwrite cheap debt, and pressured by rising costs and highly hostile regulatory framework, it is reasonable to think about the worst: bankruptcy. As of today, according to GuruFocus, CXW has an Altman Z score of 0.81, meaning that the company could go bankrupt in the next two years. Statistically, a Z score below 1.79 means a high probability of bankruptcy. Considering that the company not only has a big pile of debt compared to cash and receivables but will also experience big headwinds in revenue growth caused by regulation, this is not a good number at all. 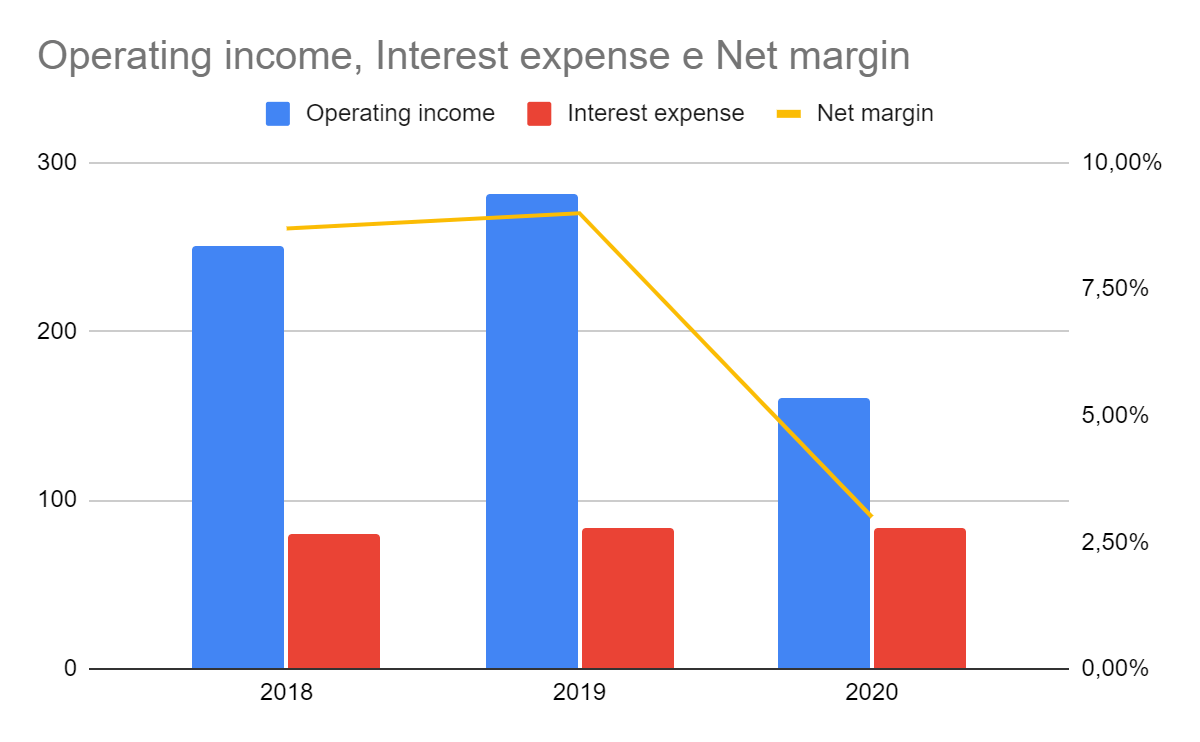 Interest expense accounted for about 50% of operating income in 2020 and net margin cratered because of extraordinary expenses and an overall higher level of generic costs due to Covid. In March 2021, Moody’s downgraded their debt to Ba2 (Non-investment grade and so speculative) and this is definitely not going to make things easier for them. Quoting their report after the downgrade:

“The rating actions and negative outlook reflect the potential risk of material revenue and earnings loss as federal agencies look to disassociate from private prison operators through the non-renewal of contracts upon expiration. As of December 31, 2020 the Federal Bureau of Prisons (BOP), United States Marshals Service (USMS), and Immigration and Customs Enforcement represented approximately 2%, 21% and 28% of CXW’s revenues, respectively.”

What could go right?

Now the question in mind is clear: what could go right? Is there anything really good about this company? Well, while all data on the balance sheet, margins and growth are not appealing, cash flows are not that bad. Indeed, in 2020 the company reported FCF (calculated as Cash from Op. activities – Investing activities) of $367 million, compared to only $110 million in 2019. It is true that last year’s results got a boost from one-time items like the sale of non-core facilities and much lower investments in new buildings, but this helped reducing pressure on the debt pile at least in the short term. Also, looking at the upcoming challenges, there is the concrete possibility that management is able to shift towards Community and Proprieties segments, making the private prisons segment much less relevant. In case this happens, the regulatory overall framework would be more friendly (considering the current levels) and the company won’t have the same revenue concentration as of today, reducing overall business risks. All that said, it is also possible, although the probability is low, that the recent ban could be reviewed, giving CXW the necessary time to make the proper changes without stressing margins too much (the rapid change in markets will definitely impact on Net and Operating margin since a loss of know-how and economies of scale will be experienced). If the Biden administration thinks that they still need some new contracts to manage private prisons, they will make the proper changes and the stock will get a rest and surely rebound. Even if these are all possible evens, the main thesis remains negative, since (1) cash flow generation last year was boosted by one-time events and their impact on financial statements; (2) the shift towards other segments not only is required now and fast but will surely have a big impact in the short term on both FCF and Net Income, and (3) last but not least, the new administration won’t probably change the recent ban unless the federal government and states are in real need for new facilities.

To evaluate a company like CXW is essential to look at EV rather than market cap only, since the big pile of debt can’t be ignored. Before looking at the possible fair price and (over)valuation, a general outlook on multiples and performance relative to peers is necessary. When looking at commonly-used metrics such as P/E, EV/EBITDA or EV/Sales this company seems really cheap and even cheaper than similar competitors like GEO or even BCO, a private security operator. With a PE of 11, EV/EBITDA at 7 and EV/Sales at 1.4, this seems really a good investment for investors who believe that a low P/E is synonymous of “bargain”. The reality is that things are cheap for a reason and investors learned to look more at cash (especially FCF) and less at EBITDA or EPS (yes, we’re not in the 80s anymore). Indeed, when looking at cash-based measures, like P/FCF or EV/FCF things change a little bit: using 2019 results, so adjusted for extraordinary real estate sales and absent Capex, the first ratio (P/FCF) is about 11, while the second stands at 27. All this without even mentioning the big discount the stock should trade given the challenges mentioned above, from regulation to pressure on the balance sheet and margins.

For the concrete evaluation a straightforward DCF model will be implemented, by simply using forecasted FCF as major input and WACC as the discount rate. The forecasts will be adapted to imply a major impact of recent Biden’s ban in the upcoming years. In particular: revenue growth is expected to be negative at CAGR of -5% for the next 8 years and margins will remain stable with a minor reduction to 8,5% Net margin after 2025, reflecting the impact of the re-shifting of the business model in super short times. The discount rate, calculated as the WACC, is about 10%, since the cost of both debt and equity (the last one calculated with CAPM) are really high. Capex as a percentage of revenues (about 11%) will decline, forced by a major and rapid re-allocation of funds toward other activities than building new reclusion facilities, but acquisitions and other costs will remain there for the first 3 years. 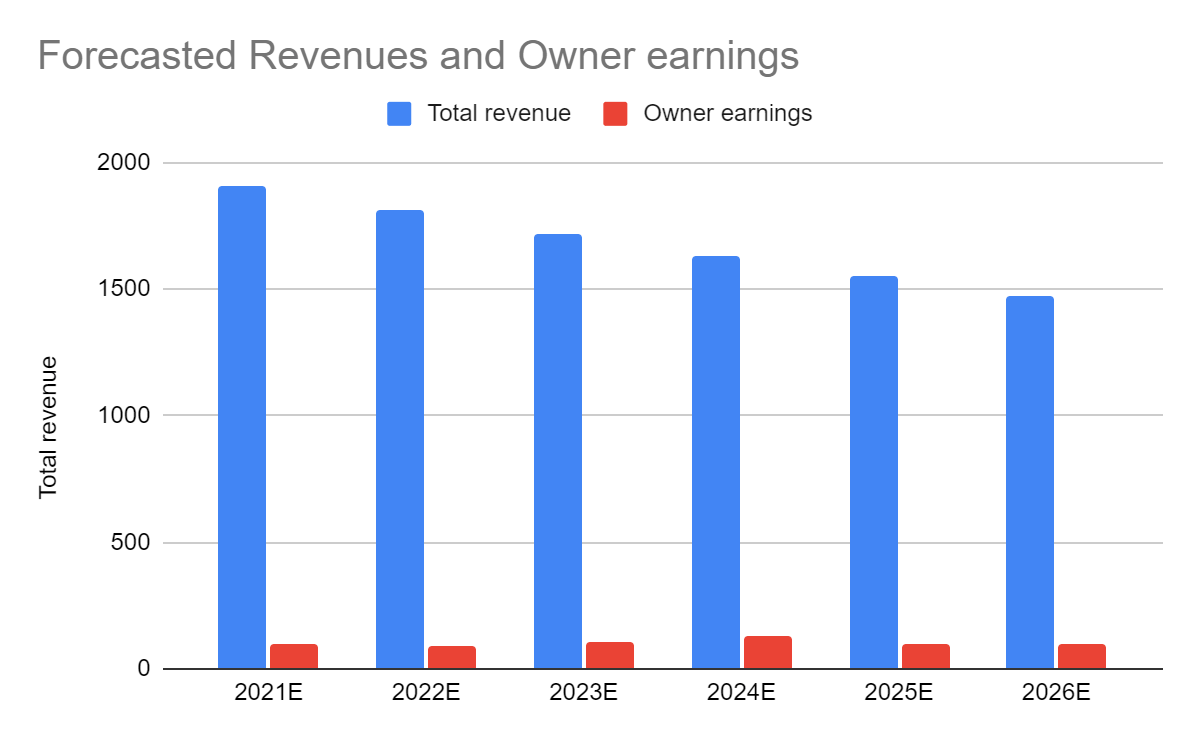 The final result is a fair equity value of about $1.2 billion, but before subtracting net debt (!). If we proceed to subtract net debt, or about $1.6 billion, the fair value becomes negative. What does it mean? That the company’s only purpose will be to repay down debt, and no real tangible value will be left to shareholders.

CoreCivic has always been an unconventional play in a peculiar market. Today, it is being attacked from every direction, starting from regulation to balance sheet strength. The keys for the (still painful) resolution and so survival are in the hands of the management. If they do not decide to act fast this company will find itself in the middle of an inexistent market (because of tough regulation and nationalization of prisons), with a super high level of debt and without any alternative other than Chapter 11 (or 7). As of today CXW is a strong sell.

J&J says it regrets injecting prisoners with asbestos, but such experiments were 'widely accepted' at the time – FiercePharma