BREAKING — The FBI today arrested STEWART RHODES, the founder of the Oath Keepers, a far-right militia, and charged him (and 10 others) with seditious conspiracy in connection with the Jan. 6 insurrection, report WaPo’s Spencer Hsu and Devlin Barrett. DOJ announcement

SINEMA’S SURPRISE — The White House legislative affairs team woke up this morning to some unwelcome news from Sen. KYRSTEN SINEMA: At noon, the Arizona Democrat would make a floor speech doubling down against eliminating the filibuster for voting rights — right before President JOE BIDEN’s planned arrival at the Capitol for a private lunch with Senate Dems to rally support for the proposal.

The call, which we first reported this morning, sent Biden aides and Hill Democratic leaders into a tailspin, according to a source close to the White House. Their scripted kabuki theater would now have a new and unplanned scene from a player who has been very deliberate about when she speaks up — and would likely upstage the president’s own appearance on the Hill.

On the floor, Sinema delivered an impassioned address blaming both parties for the “spiraling division” in the country caused by “wild reversals” in policy. “Nearly every party-line response to the problems we face in this body — every partisan action taken to protect a cherished value — has led us to more division, not less,” she said.

Trying to thread the needle, Sinema said that while she ultimately supports the passage of Democrats’ voting rights bills, she “will not support separate actions that worsen the underlying disease of division” by changing Senate rules to pass the legislation with a simple majority vote. A 42-second clip from this section of the speech

She also voiced her disappointment that there wasn’t more Republican support for the bills, and lamented a lack of “serious effort on the part of Democratic leaders to sit down with the other party and forge common ground on these issues.” (Though, as Burgess Everett notes, “Dem leaders gave [JOE] MANCHIN lots of time … to round up GOP votes on this, and they ended up with one [LISA] MURKOWSKI vote for [the] John Lewis bill. Republicans talked to Manchin, but made the decision to not engage on these bills … because they oppose them.”)

— Rep. RUBEN GALLEGO (D-Ariz.), who has been floated as a potential primary challenger to Sinema, called her out by name on the House floor: “Today, the House showed where it stands: We won’t shrink from protecting our democracy and the voting rights of all Americans. It’s past time for the U.S. Senate — and Sen. Sinema — to do the same.”

Shortly after 1 p.m., Biden arrived at the Russell Senate Office Building, walked into the third-floor Kennedy Caucus Room and was greeted with applause. But there was no mistaking what was transpiring.

“Sinema is having Joe Biden for lunch,” one Hill aide quipped to Playbook.

A message from the Freedom to Vote Alliance:

A strong economy depends on a strong democracy. But the cornerstone of our democratic system – the freedom to vote – is under attack. States nationwide are making it harder to cast ballots and easier for partisan officials to overturn election results.

For businesses to prosper, our basic rights must be protected. The Freedom to Vote Alliance is calling on the Senate to reform its rules and give voting rights legislation a straight up or down vote.

2024 WATCH — The RNC is planning to require presidential candidates to promise not to take part in the debates hosted by the Commission on Presidential Debates, following months of discussions, NYT’s Maggie Haberman scoops. The nonpartisan group has sponsored the country’s presidential and vice presidential debates for decades, but Republican agitation has grown in the Trump era amid the party’s attacks on many traditional Washington institutions.

The RNC was particularly concerned that the first 2024 debate wouldn’t take place before early voting began. It’s not clear what will happen next, or whether we’ll get any debates next cycle. RNC Chair RONNA MCDANIEL’s letter

— The CPD’s response: “The CPD deals directly with candidates for President and Vice President who qualify for participation in the CPD’s general election debates … The CPD’s plans for 2024 will be based on fairness, neutrality and a firm commitment to help the American public learn about the candidates and the issues.”

NEW PANDEMIC ACTIONS — Biden announced this morning that he’s directing his administration to procure another 500 million coronavirus tests, on the top of the 500 million that were already announced, bringing the total to 1 billion as the Omicron variant rages across the country. (Reuters’ Jeff Mason had the initial scoop.) Of course, Americans are still waiting on that initial tranche as test shortages abound; critics have said the administration’s actions were too little, too late.

FOR YOUR RADAR — Meredith Lee has a sensitive story, citing 28 sources, on Democrats’ concerns about House Agriculture Chair DAVID SCOTT (D-Ga.), who has “noticeably slowed in the last few years,” with “increasingly halting speech and trouble at times focusing on a topic.” As the committee gears up to open talks on the next farm bill, some are asking whether the widely respected 76-year-old is really the right man for the job, citing his struggles corralling routine committee hearings in recent months. But House leadership expressed confidence in Scott, and he dismissed the critics as “a bunch of wannabe chairmen.”

“I’m as strong and vibrant as a roaring lion,” Scott added.

HEADING TO THE FLOOR — Biden’s FDA commissioner nominee ROBERT CALIFF advanced out of the Senate HELP Committee this morning on a 13-8 vote. Sens. BERNIE SANDERS (I-Vt.) and MAGGIE HASSAN (D-N.H.) opposed Califf along with several Republicans, but Califf moved a step closer to becoming the FDA’s first permanent leader in almost a full year of the Biden administration. More from Bloomberg Law

CHILD’S PLAY — This week marks the first time in six months that American families will miss out on last year’s expanded child tax credit payments — and the poorest families will take the biggest hit. Brian Faler takes a look at whether and how Democrats might be able to get Manchin on board with reviving the payments. One factor that could help them: The work requirements that Manchin wants automatically snapped back into place at the start of the year. And families aren’t done seeing the benefits of the expansion yet: Though monthly payments have stopped, parents can claim another huge chunk of money when they file their taxes.

TOP-ED — Rep. KATHERINE CLARK (D-Mass.) writes for WBUR about the decision to stop dyeing her hair — and the warnings she got that going gray would reduce her political clout (which were not borne out). “Your hair should be whatever makes you feel happy, strong, or beautiful. Wear your decision with pride and as a challenge to any notion that women should be anything other than equal and empowered.”

PENNSYLVANIA GOP SENATE PRIMARY HEATS UP — Former hedge fund executive DAVID MCCORMICK jumped into the race this morning, the Washington Examiner’s Salena Zito reports from PIttsburgh. He made it official with a Fox Business interview and a tough-on-China Fox News op-ed clearly designed to tackle an issue on which McCormick’s opponents have bashed him.

— MEHMET OZ, one of McCormick’s top primary opponents, has a Palm Beach fundraiser next week. Among the co-hosts are former Trump-era Treasury Secretary WILBUR ROSS and casino magnate STEVE WYNN, per the N.Y. Post’s Juliegrace Brufke.

THE NEW GOP — Nevada gubernatorial candidate MICHELE FIORE is not only running in a Trumpy mold, she’s running in a Trumpy time zone — at least on TV. Fiore bought ad time on Fox News in Mar-a-Lago’s Florida media market, AP’s Sam Metz reports from Carson City. It’s a reflection of “[DONALD] TRUMP’s enduring post-presidential influence in the Republican Party and … how his endorsement is seen as a potential game-changer by Republicans embroiled in primary battles throughout the country.”

JAN. 6 AND ITS AFTERMATH

STRANGE BEDFELLOWS — The House is defending the structure of the Jan. 6 committee in court by pointing to the precedent of two select committees Democrats once decried: the Katrina and Benghazi investigations. Kyle Cheney reports that in a late-night filing Wednesday, the House counsel sought to counter legal claims that the committee’s structure is invalid because Republican leaders didn’t appoint any of its members. The filing also argued that Republicans didn’t formally challenge the committee’s validity when the House passed contempt resolutions for MARK MEADOWS and STEVE BANNON. The filing

UNSETTLING INCIDENT — U.S. Capitol Police announced today that they arrested a Michigan woman Wednesday who said she’d driven to D.C. to talk about info she had regarding Jan. 6, 2021. KERY LYNN MCATTEE had four firearms in her truck, police said. “At this time, there is no evidence the 58-year-old suspect was coming here to do anything, except speak with our officers.”

AMERICA AND THE WORLD

RUSSIA DECLARES ‘DEAD END’ ON TALKS — Russian officials said today they had no intention to continue talks with the U.S. and NATO in the coming days over Ukraine, citing a “dead end or difference of approaches” as the West tries to stave off a possible invasion. Meanwhile, Poland’s foreign minister said that “the risk of war in the OSCE area is now greater than ever before in the last 30 years.” More from Reuters

— Russia dangled the prospect of dispatching “military infrastructure” to Venezuela or Cuba, dramatically escalating tensions with the U.S. if the West doesn’t bend to Russia’s wishes. More from the WSJ

— But Russia did begin withdrawing the military alliance it’s led in Kazakhstan for the past week, per the NYT.

IS NOWHERE SAFE? — More U.S. officials abroad have reported being struck by the mysterious “Havana syndrome,” this time in Geneva and Paris, reports WSJ’s Vivian Salama. The three suspected cases in Switzerland and one in France included one person who had to be medevaced to the U.S. for treatment.

CLIMATE SIREN — 2021 was roughly tied for the sixth-hottest year on record, and new data shows that now all seven of the hottest years ever observed were the past seven years, WaPo’s Sarah Kaplan and John Muyskens report.

UNSTOPPABLE — Florida Gov. RON DESANTIS is exerting an iron grip on Tallahassee, bending state legislators to his will as “arguably the most powerful governor in Florida’s history,” Gary Fineout reports. His national profile, popularity and hefty campaign war chest have allowed DeSantis to muscle his agenda through on a variety of culture-war and pandemic issues. And he’s demanded total loyalty from fellow Republicans, cutting off communication with those who go against him.

“Ron DeSantis is essentially the speaker of the House, the president of the Senate and the chief justice of the Supreme Court right now,” one Republican state legislator said.

THE LONG ARM OF JUSTICE — One of the planks of the 2018 criminal justice reform Trump signed into law is beginning to bear fruit this week: The DOJ is starting to transfer out of federal prisons thousands of inmates who have accrued “time credits” by participating in programs meant to reduce recidivism, AP’s Michael Balsamo and Michael Sisak report.

STICKING TO AN HOUR — Paramount+ has canceled “60 Minutes Plus,” the streaming spinoff of the longtime CBS newsmagazine, per Variety’s Brian Steinberg. Staffers were told today, and the company said it expects to find employees other jobs internally.

FIRST IN PLAYBOOK — HHS Secretary Xavier Becerra has appointed Angela Ramirez as the department’s new deputy chief of staff, following the departure earlier this month of Anne Reid. Ramirez joins HHS from the White House, where she was a special assistant to the president and House legislative affairs liaison. She previously was chief of staff to then-Rep. Ben Ray Luján (D-N.M.).

A message from the Freedom to Vote Alliance: 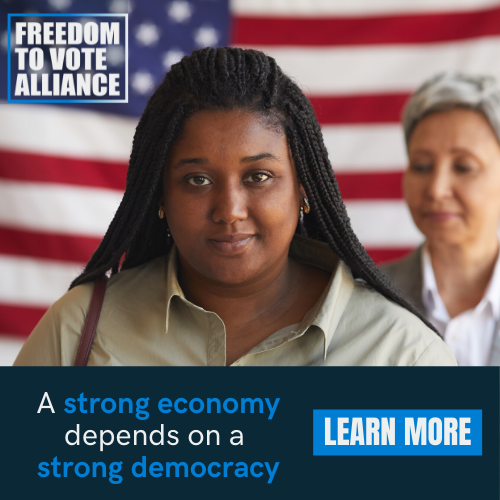 “Dirty Work”: Uncovering the Mechanisms of Concealment in the World of Work – Non Profit News